Kerala cuisines are a special treat.

Almost all of the spices have medicinal values and are not just for the taste. Most of traditional Kerala cuisines are vegetarian, however you can also find several meat and fish dishes. Some meat items came to Kerala from other parts of India and from outside India and became part of normal Kerala cuisines.

Breakfast is mostly vegetarian in southern parts of Kerala, while it is a non-vegetarian affair towards the north. Puttu, dosa, iddli, idi appam, appam, etc are the common items for breakfast. Now, you can also see Porotta, chapatti, etc also passed on as breakfast.

This is the most important meal of the day. Boiled rice is the main item, with assortment of vegetarian or non-vegetarian dishes. Chicken biriyani, mutton biriyani, beef biriyani, egg biriyani and vegetarian biriyani are served in the hotels (restaurants).

A tea and a snack at around four o clock in the afternoon has become an integral part of the lives of majority of Kerala people. The snacks can be vada of a dozen types, pazham pori (banana fry), etc.

Supper is like the midday meals for most of the people. However, some people prefer kanji (boiled rice, without removing the water) as it is soft on digestive system and easy to consume.

This is not the rule of Kerala's eating habits. There are differences in eating habits from one region to another and the eating habits of the southern Kerala is entirely different from what prevails in other parts of Kerala. There is rich variation in the culinary habits of people of Kerala and this one factor makes this land a paradise for connoisseurs of fine dining.

Nearby Places To Visit In Varkala 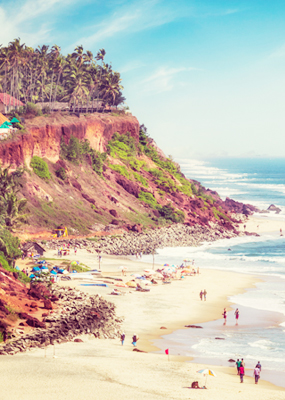 Walk your way through paved sea side road to Varkala, a small temple city and a renowned spiritual center of Hindus. ... 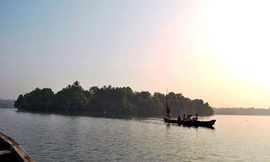 Ponnumthuruthu is a backwater island which is situated about 12km south of Varkala. You can board a ... 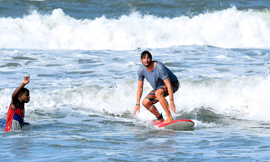 Set along the shoreline of the Arabian Sea, Edava Beach is a well-known travel attraction in Thiruvananthapuram, Kerala... 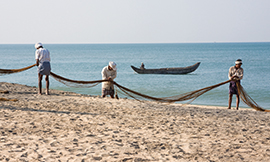 The pristine Kappil Beach and backwaters is situated 7 km away from Varkala, the famed beach destination.... 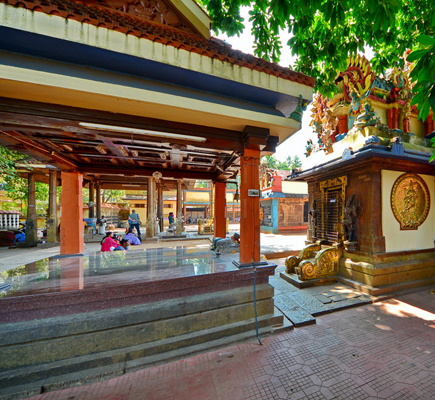 One of the ancient temples in Kerala, the Janardhana temple is a major pilgrim spot in Varkala...

Kadaltheeram is a beach, it is also the name of our real special resort, from where you enjoy the pristine climate, serene backwaters and the soothing power of Ayurveda.Varkala beach has several specialties. The Ancient Janardhana Temple, the mineral water springs, cliff beaches and the sight of sea meeting backwaters make it a special treat for everyone.

What Our Clients Are Saying

It was my fourth stay at this resort and for the first time in one of the new larger rooms opened since September 2017. With the cure, the treatments and the care, I am very satisfied as before, especially the large room, with a super pleasant bathroom, especially suitable for two people. It has a wonderful view over the plant to the sea, also an air conditioning is available if you wish. My stay was made even more pleasant.

I stayed multiple times in the Kadaltheeram and it is always a pleasure to be there.

Rooms, food, therapists, doctors, all went very well and all are very freindly. I like really the treatments, which are allways good. Also the food tast well, in general a very friendly atmosphere.

Great place - great spirit! The resort is directly located at the beach ... fantastic! The appartements are in authentic Kerala-style...very nice! Everything is clean and functioning... a great plus! The staff is warmhearted and so friendly. The doctors support your healing process - if needed - in every way. After only two weeks I noticed a remarkable health improvement thanks to the therapists, the ayurvedic vegetarian food and the yoga exercises. I will definately go back again.

We spent a few wonderful weeks here. The staff are very friendly and helpful the food is fantastic and all locally sourced.

The treatments are also very good. You receive an initial consultation and then a plan is tailored to suit your needs. This is followed by daily feedback to the doctors so they can adjust as necessary. The result also offers yoga and meditation.

Combination of the treatments and the meditation and yoga will leave you feeling fantastic and ready for anything.

It was like coming home from the first day on! We had a wounderfull stay. Good food, Kerala style.

The staff, management, owner and doctors were helpful, flexibel, competent and very friendly.

The ayurvedic massages are incredible!

Thanks to all of you from the deepest of our heart. We hope to have the possibility to come back soon!

Thank you for your warm welcome | Brigitte&Lea, Switzerland

It was my 4th visit to Kadaltheeram for a very good and sustainable Ayurveda cure. I am simply thrilled with the result of this cure. Thanks to a very experienced and super nice Dr. Manu and his wife Smitha I got again an Ayurveda cure that has greatly increased my health. I highly recommend this doctor, be it in competence and friendliness and, of course, in the tailored treatments and medication. The result is fantastic and I feel reborn. Worth mentioning is of course the great ayurvedic kitchen which a very nice chef prepares there. It all tastes good even if you're not a die-hard vegetarian. The management with hashim at the top takes care of the concerns of their guests in a very friendly and timely manner. And of course (in my case) the two Ayurveda therapists who understand their craft excellently and are simply a well-rehearsed team. You can feel it with every treatment. This is where the old therapy rule comes in: an application is at the same time an affection to the patient or guest. All in all a very successful cure in Kadaltheeram. With one sentence: food, applications, rooms, doctor - all succeeded. It goes without saying that one does not descend into a luxury shed, but has the focus on health and well-being. Thank you Manu, thank you Kadaltheeram. I'll be back for sure.